Sealed Bids will be received by the City of Sumner by the City Clerk at the Finance Department Counter located on the second floor of Sumner City Hall, 1104 Maple Street, Suite 200, Sumner, Washington 98390-1423, until 10:00 am on Friday, October 28th, 2016, as shown on the clock nearest to the desk of the Finance Counter. Bids will thereafter be opened and publicly read aloud. Bids received after the time fixed for Bid Opening will not be considered.

All bid proposals shall be accompanied by a proposal guarantee (certified or cashier’s check or approved bond) payable to the City of Sumner in an amount not less than five percent (5%) of the amount of the proposal price. Should the successful bidder fail to enter into such contract and furnish satisfactory performance bond within the time stated in the specifications, the bid proposal deposit shall be forfeited to the City of Sumner.

The City of Sumner reserves the right to waive informalities in the bidding, accept a Proposal of the lowest responsible Bidder, reject any or all Bids, republish the Call for Bids, revise or cancel the work, or require the work to be done in another way if the best interest of the City is served.

The City of Sumner in accordance with Title VI of the Civil Rights Act of 1964, 78 Stat. 252, 42 U.S.C. 2000d to 2000d-4 and Title 49, Code of Federal Regulations, Department of Transportation, subtitle A, Office of the Secretary, Part 21, nondiscrimination in federally assisted programs of the Department of Transportation issued pursuant to such Act, hereby notifies all bidders that it will affirmatively insure that in any contract entered into pursuant to this advertisement, disadvantaged business enterprises will be afforded full opportunity to submit bids in response to this invitation and will not be discriminated against on the grounds of race, color, national origin, or sex in consideration for an award.

The City of Sumner is an Affirmative Action/Equal Opportunity Employer and hereby notifies all Bidders that it will affirmatively ensure that in any Contract entered into pursuant to this advertisement disadvantaged business enterprises will be given the full opportunity to submit Bids in response to this invitation. The City of Sumner does not discriminate on the basis of race, color, national origin, sex, religion, age, or disability in employment or the provisions of services.

Plans and Specifications will be available electronically with online registration by clicking here. Informational copies of maps, plans, and specifications are also available for review at Sumner City Hall, Public Works Department, 1104 Maple Street, Suite 260, Sumner, WA 98390-1432. Prime Contractors submitting a Proposal must be included on the plan holders list, which is developed and maintained by the Owner. If a bidder is not registered on the City of Sumner’s official plan holders list, then their bid may be considered as nonresponsive.

There is a Pre-bid Conference scheduled for Monday, October 24th 2016. The conference will begin at the Union Bank building located at 801 Alder Avenue, Sumner, WA 98390 at 2 pm (local time). Prospective bidders are encouraged to participate.  No unauthorized visits or unscheduled visits will be allowed.

The improvements for which bids will be received are described as follows:

This contract provides for the redevelopment of the project sites, including abatement and demolition of existing Union Bank and Multipurpose Center buildings in Sumner, Washington. The project includes the grading and erosion control associated with the proposed demolition and redevelopment, as well as paving and surfacing of the site, all in accordance with the Contract Plans, the Contract Provisions, and the Standard Specifications.

The contractor will have 75 calendar days to complete the work in compliance with all applicable laws and regulations. 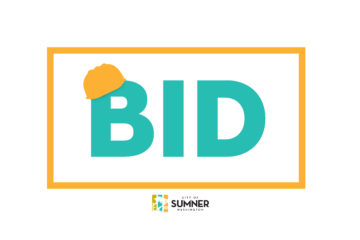