The City of Sumner solicits interest from consulting firms with expertise in engineering and professional services.  Services are anticipated to commence in the second quarter of 2018.

The City of Sumner reserves the right to amend terms of this “Request for Qualifications” (RFQ), to circulate various addenda, or to withdraw the RFQ at any time, regardless of how much time and effort consultants have spent on their responses.

The City of Sumner reserves the right to retain the services of responsive firm(s) for subsequent phases associated with this project.

Prospective consultants will be held to Federal EEO requirements for federally funded projects and to the ADA and Civil Rights language adopted by the City of Sumner.

This material can be made available in an alternate format by emailing Doug Beagle, Deputy Public Works Director at dougb@sumnerwa.gov or by calling 253-299-5715.

The City of Sumner in accordance with Title VI of the Civil Rights Act of 1964, 78 Stat. 252, 42 U.S.C. 2000d to 2000d-4 and Title 49, Code of Federal Regulations, Department of Transportation, subtitle A, Office of the Secretary, Part 21, nondiscrimination in federally assisted programs of the Department of Transportation issued pursuant to such Act, hereby notifies all bidders that it will affirmatively ensure that in any contract entered into pursuant to this advertisement, disadvantaged business enterprises as defined at 49 CFR Part 26 will be afforded full opportunity to submit bids in response to this invitation and will not be discriminated against on the grounds of race, color, national origin, or sex in consideration for an award.

The City of Sumner is requesting proposals for project design for the White River Restoration project.  The design is intended to advance preliminary concepts from the feasibility stage to an understanding and quantification of all the major project elements.

The project reach reflects an artificial condition that started with a dredged channel into which the White was diverted in 1914. The current channel is that of the Stuck River, which acted as an overflow channel and lacks the geomorphic features it would have developed naturally if it had not been leveed and dredged. Because of this, critical salmon habitat and flood capacity is missing from this portion of the river. This project aims to allow for the future formation of this critical salmon habitat while increasing the flood conveyance of the river.

This project is one portion of an overall reach scale effort through the City of Sumner which tries to create a sustainable river system to the extent feasible in this reach of the river. This portion will take place on the left bank of the White River between river miles 2.5 and 4.2 that includes approximately 162 acres and aims to address the issues present in the reach through a variety of methods. More natural riverine processes will be created in part by excavating and floodplain wetland and slough habitats which will then be connected to the river by setting back the existing levee. This will allow the river to interact with its floodplain more frequently than it currently does (which is only during the 100-year flow). This strategy will also allow for some natural channel migration which is essential for the maintenance and creation of salmon habitat. The side channels will provide off-channel habitat these juvenile fish need.  Large woody debris in the main channel and side channels will also provide essential cover, pools and refugia for juvenile and adult fish.  The riparian forest will provide for long term accumulation of the large woody debris while also providing shade.

The Statement of Qualifications (SOQ) should describe the composition of the proposed team, the qualifications of the key individuals identified on that team, and the relevant experience of the team on similar projects.

The SOQ should discuss the team’s abilities in the following areas:

Respondents may include sub-consultants within their project team.

Selection shall be based on the following:

After the deadline for acceptance of proposals, the SOQ’s will be reviewed and evaluated by an Evaluation Committee comprised of, but not limited to, City staff, appointed or elected officials, and individuals chosen by Public Works staff to participate.  The Evaluation Committee will rate written proposals based on the evaluation criteria listed above.

Interviews of the top firms as ranked by the Evaluation Committee along with feedback from references may be incorporated into the final rankings.

If a contract cannot be negotiated with the top ranked firm, the City will contact the next firm in line and attempt to negotiate with that firm.  The process will be repeated until an agreement is reached.

The Consultant’s qualifications should include the following information:

The Statement of Qualifications (SOQ) should consist of no more than twelve (12) pages.  The cover letter, front and back covers, and section dividers will not be counted in the 12 page limit.

Submit five (5) hard copies of the SOQ along with a PDF.

Five (5) hard copies and one (1) electronic copy of the Technical Proposal shall be delivered by 1:00 p.m. on April 6, 2018 to the attention of Doug Beagle, Deputy Director of Public Works, at the following address:

Any proposal received after the specified date and time will automatically be rejected and will not receive any further consideration by the City.  Postmarks will not be accepted.

Published in the Seattle Daily Journal of Commerce, March 21st and March 28th, 2018.

All questions regarding this solicitation should be directed to Doug Beagle, Deputy Public Works Director, at (253) 299-5715. 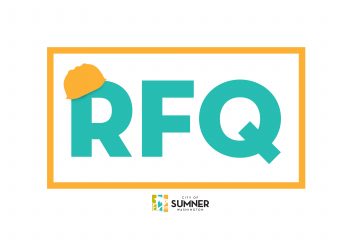